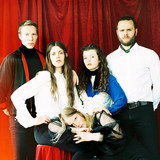 For their fifth album Ride The Fire, Icelandic rock band MAMMÚT are assembling images, words and sounds to create their own mythology, built on the trust they have established during their 17 years together. The album will surprise long-time listeners with its relative lightness, a sound that singer and lyricist Katrína Mogensen defines as “the calm after the storm” – and a step away from the intense introspection of 2017’s astonishing Kinder Versions. The trust essential for the making of the album is hard-won. Mogensen and guitarists Alexandra Baldursdóttir and Arnar Pétursson formed the first incarnation of MAMMÚT as teenagers in 2003, with bassist Ása Dýradóttir joining later. Ride The Fire sees the newest member of MAMMÚT made official: drummer Valgeir Skorri Vernharðsson, whose expressive, expansive style is a perfect match for the album’s searching spirit. Recorded in Reykjavík and London in August and September 2019, it is the first album they have made between two countries. The record was produced by fellow Icelander Árni Hjörvar of The Vaccines – a close friend of the band, and another reinforcement for their close-knit group. It was then mixed by Sam Slater, who produced the Joker and Chernobyl scores with Oscar-winner Hildur Guðnadóttir, and mastered by Mandy Parnell, who has worked with fellow Icelandic luminaries Björk and Sigur Rós.