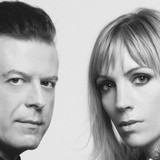 "Got 8mm and put it on the air the next day." - Nic Harcourt "[Self-Inflicted Heartache] is great. I'll add it into Locals Only rotation this Sunday." - Kat Corbett

/KROQ "This one is sharp as a f'ing razor." - Antiquiet Radio 7 years since the critically-acclaimed Between the Devil & Two Black Hearts, LA-based 8mm ("eight-millimeter") returns with the stellar new EP HEART-SHAPED HELL. Though the band has been long embraced by music supervisors and industry tastemakers, their new single "Self-Inflicted Heartache" is starting to resonate with wider audiences. - “Juliette vamps a little, aches a little and seduces a whole lot.” – Kevin Bronson / BuzzBandsLA - "Sean Beavan’s producer/multi-instrumentalist/engineer bones thoroughly your shift gears and your headspace." - High Voltage - “When I heard them, I was just as floored as everyone else in the venue.” – All Access Magazine Founded by Grammy-nominated producer/mixer multi-instrumentalist Sean Beavan (NIN, Marilyn Manson, 3Teeth, APC) and his multi-talented wife, Juliette Beavan, 8mm , were one of the first bands to embrace DIY and strategic licensing. They became championed by luminaries such as Nic Harcourt, Geoff Boucher, Kevin Bronson, Jason Pettigrew, and 80% of their catalog has been licensed to film and television ("You're The Worst",