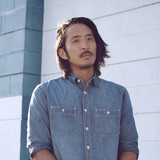 Karaboudjan is the solo project of California native and multi-instrumentalist Billy Kim. By the age of 17, Billy had already embarked on his first national tour across the U.S and since 2016, has toured with Grammy-nominated musician, Tycho.   Billy's debut EP, IMAGO will drop later this year, with lead single "Seems Like" releasing on March 26.   “The name Karaboudjan had always fascinated me - it was the name of a ship in The Adventures of Tin Tin,” shares Billy. “I remember begging my parents to take me to the library so I could check out the next book in the series with which I was so infatuated. For me, Karaboudjan reminds me of the purity of my youth and its enormous curiosity of life unlived."   Much like Karaboudjan, IMAGO is also something of a tribute to Billy’s youth, as well as to his late father.     Influenced by artists like Radiohead, Blur, Tame Impala, Jon Hopkins, Department of Eagles, Animal Collective, the Beatles, the Beach Boys, and Simon & Garfunkel, Billy describes Karaboudjan as dreamy psych-indie rock.