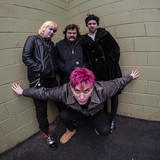 New Primals is a Noise/Dance-Punk band from Minneapolis, MN, consisting of Sam Frederick on Guitar & Vocals, Ali Terveen on Bass, and Lars Oslund on Drums. New Primals sound is best described as a cacophony of piercing sounds, disjointed guitars, and atonal melodies, which are roped together by heavy, danceable rhythms. This sound is delivered in an appropriately punishing fashion at the bands notoriously frenzied, chaotic and confrontational live shows. On stage, New Primals are a tornado. Their set, at times, feels like tightly controlled chaos, and other times, feels as though things are being held together by a thread, and that it might fall apart at any moment. As Twin Cities Media puts it: “The band itself is like a bomb, the music they create is the explosion and the members are the shrapnel.” Having formed in 2016, and after years of touring, refining their sound, scaring the shit out of people, and being all-around weirdos, New Primals released debut album 'Horse Girl Energy' via Learning Curve Records in March of 2020.