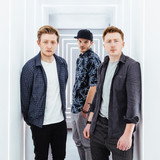 Grafton Ash are a 3 piece electro pop band from Worcestershire, UK. With their strong vocal harmonies and fusion of electronic and acoustic styles, the bands live set projects a dark energy that combines well with their subtle, meaningful lyrics. Their debut EP 'Avalanche' was released in Summer 2015 and quickly gained attention and backing of BBC Introducing. With the title track becoming ‘Track of the Week’ twice and the lads being invited to film a live session on the BBC Introducing Stage at Nozstock 2016. They joined FLYTE and Tom Walker, supporting them both on their UK tours and despite being unsigned; the past few years have seen them share the stage with The Feeling, The Fratellis and Reef, playing sold out shows at the Birmingham O2 Institute and London O2 Academy Islington. They were recently invited to support James Blunt on his Afterlove World Tour at the Arena Birmingham (NIA) stepping in for singer-songwriter Jamie Lawson in his absence. Their latest single, 'CIRCUITS' was released in 2019 and is huge step towards their dark electronic live shows; drawing influence from the causes and affects of mental health in the modern age.