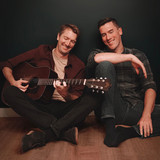 Canyon Kids is a recording project founded in 2013 by Bo Elledge & Dusty Nichols in Jackson, WY. The singer songwriting team happened to work together on the banks of the Snake River shooting whitewater photos and had plenty of time to put together songs in their hammocks with beat up acoustic guitars.   Meeting by chance after moving to the least populated state, the two have found a wonderful balance and achieved more than they ever thought they could creating and performing original music in the middle of nowhere.   Through the years they've been featured on NPR, consistently voted a best local band, & shared stages with critically acclaimed national acts; Hayes Carll, Lukas Nelson, Susto, G Love, Brett Dennen, Anderson East, JJ Grey & Mofro, & The Infamous Stringdusters.