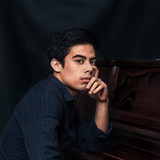 A Filipino-born composer based in Sydney, Pat uses his wide palette of musical appreciation, from classical to hip-hop, to create a melting pot of music. In December 2017, he graduated from the UST Conservatory of Music in España, Manila, composing over 50 pieces of music for various orchestral combinations during his 4 year stay. He created orchestral and choral arrangements performed in recital halls as well as songs for band and solo setups. He's now focussing on music production and song-writing for different kinds of disciplines, from media music, film scoring, and live performance to pop, electronic & hip-hop compositions. His discography is still largely unreleased, having taken a Double Masters Degree in Creative Industries & Media at Macquarie University.