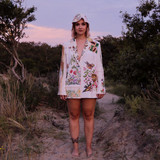 Jantine is a UK-based multi-platinum & award-winning songwriter/singer/producer/artist from The Netherlands. She signed to Sony Music Publishing in 2019 and has worked with a variety of artists including Skrillex, Ryan Lewis, Alison Wonderland and Hardwell. She’s also worked in the K-pop world, with cuts for Monsta X, SHINee, and NCT127. With the latter release, she reached #1 in the Billboard Charts, with over 200,000 physical sales worldwide. As a vocalist, she has gained over 80 million Spotify streams and had airplay on BBC1 and SiriusXM. As a writer, she has racked up over 200 million Spotify streams and won a BUMA Award for her contribution to Dutch pop music. Full discography: @JANTINEDISCO Her recent collaboration ‘Never Be The Same’ with @WizG has been named SiriusXM’s BPM Breaker in April 2021 and has been on high rotation ever since.