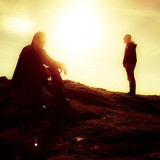 In 2003 Peter J. Jost and Ing O. Leitner drive on a music festival. There, the course is set for a studio project, which is long still bears no name. Hardly songs are produced and developed further. Soon some demos are ready, they decide to build their own studio, to be able to record professionally there. Somewhere in the summer of 2006 in some bar with some drink they decide at 21:34 o'clock to give the project the name "Senner". Equipped with a bad camera but with a lot of enthusiasm they turn a few music videos and write uninhibited continue with new material. 2008 the musical running tracks are separated, Peter J. Jost begins as a guitarist with the band "Scorse of Morte", Ing O. Leitner moves to Hamburg to work on computer games. As the paths cross again, one decides to present the already finished Goldmaster to the world. On December 10th, 2016 the time has finally come: The debut album "The Opposite Is True" sees the light of the world. In 2017 and 2018, new ideas will be collected and preparations made to present the whole shit to the public. In January 2019, two more musicians will join the project: Daniel Jost (Bass) and Bernd Presslauer (Drums). Since then, work has been going on on a live performance in a secret, dark lab.