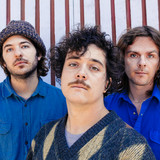 Great American Painting, the fifth full-length from The Districts, is the rare album that shines a bright light on all that’s wrong in the world but somehow still channels a galvanizing sense of hope. With equal parts nuanced observation and raw outpouring of feeling, the Philadelphia-based band confront a constellation of problems eroding the American ideal, ornamenting every track with their explosive yet elegant breed of indie-rock/post-punk. Threading that commentary with intense self-reflection, Great American Painting ultimately fulfills a mission The Districts first embraced upon forming as teenagers in small-town Pennsylvania: an urge to create undeniably cathartic music that obliterates hopelessness and invites their audience along in dreaming up a far better future.

Produced by Joe Chiccarelli & recorded at the legendary Sunset Sound in Los Angeles, Great American Painting was deeply informed by the two months that Districts vocalist/guitarist Rob Grote spent living in a cabin in Washington state at the height of the pandemic. “I was mesmerized by how those unspoiled landscapes really capture a timeless idea of what America is,” says Grote. “I’d just come from taking part in the protests in Philly and getting tear-gassed, and it felt so strange to go between those two extremes. In a way this album is asking, ‘What is the great American painting? Is it police brutality, or is it this beautiful landscape?’ And the truth is it’s all of that.”