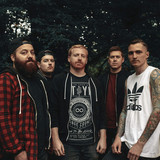 « Music is a part of us, we started as friends and grown as brothers ». The main strength of Wolves Scream lies in the perfect harmony and cohesion that exists within and around the band. A unifying music and a state of mind which push to think about the world around us. The five pieces belgian post-metalcore band were founded in April 2010. After more than 50 concerts throughout Belgium and some line-up changes, the band acquiered a reputation and cohesion. In early 2014, the release of HURRICANE opens a new chapter and defines the new basics of their music: a more melodious and edgier sound. Their hardwork push them on the next step and give them the chance to share the stage with great international bands such as While She Sleeps, Obey the Brave, Stick To Your Guns, The Ghost Inside, The Color Morale, Vanna, Our Last Night, Being as an Ocean, Atreyu, ... In 2015, they had the opportunity to have a spot on amazing festivals as GROEZROCK, DOUR FESTIVAL, GRASPOP and ROCK HERK.

They also collaborate with Franky Desmet Van-Damme, singer from Channel Zero, whom gives them another vision of a band. After more than 120 gigs, the band decided to write a new chapter. In 2016, they recorded their first LP, called VESTIGES, at Pitchback Studios with Aljoscha Sieg and David Beule (Vitja). Quickly, Wolves Scream got a deal with Redfield Digital (GER) for this LP. 2017 could well be the start of something special for Wolves Scream. B