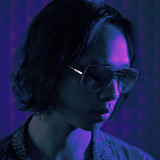 Geoffrey Graven (known under his stage name Sung) is a French-Korean electronic musician from Paris. Since 2013, he has dedicated himself to creating tracks that are heavily influenced by the 80’s pop culture, the cyberpunk genre and the conquest of space. His compositions are a blend of retro synthetic sounds and powerful urban beats that make you feel like you’re cruising down the streets of a futuristic city; many of them are featured in independent video games such as Half-Line Miami, Fragmental or Hypergun and also major big productions such as Forza Horizon 4. 2017 marks the beginning of his live shows followed by an international recognition that will lead him to perform in France, Russia, Netherlands and the United States within a year. In June 2018 he released his first full length album Fahrenheit mostly produced with analogue synthesizers. In January 2020 he releases his second LP Monster including vocals for the first time, soon followed by Late Summer which marks the beginning of a new musical approach. His abilities to compose in various styles around the genre and the extreme attention to details (he also does his own artworks too) make Sung one of the most prominent artists of the retrowave scene.