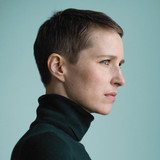 “Sometimes songs are like secret rooms where you can say things that you don’t say anywhere else,” says Big Fox’s Charlotta Perers. If songs are like secret rooms for Perers to whisper into, the end result becomes a secret portal for listeners to travel through, landing in a place equally as magical, tranquil and revelatory. On her third album Perers continues her exploration of beautifully tender songs, led by her rich yet airy voice, deft accompaniment, production that crackles as warmly as a log fire and textures that glide gracefully between the delicate and immersive. Ho- wever, this album – which weaves between dream pop ambience and skilfully crafted songs - finds itself being released six years since her last album Now.