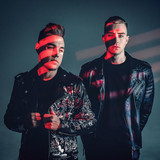 With a catalogue signed to Mixmash Records, Revealed Recordings, Ministry of Sound, TurnItUp and the like; Bonka haven’t taken the stale ol’ road through electronic music but have instead aggressively taken their sound right to where it needs to be - on dance floors and in the playlists of fellow electronic icons. While proudly boasting 3x Billboard Mix/Airplay Top 10's singles in the United States, their chart topping singles ‘Focus’ & 'Chase' both took out the top spot with a #1 placing in the ARIA Club Chart and saw their fair share of rotation across major Australian radio, while 'Chase' also took out #1 in the U.S. Media Base Charts being the most played dance record on American radio. Hits like ‘R.A.G.E.’, ‘Switch It’, 'Overdrive' & 'Bang Boom' all saw international attention topping the prestigious Beatport charts at #1 consecutively. Blazing the full musical empire for their fans, Bonka also blast out a monthly show ‘Let’s Go Bonkas’ featuring their own recipes alongside guest spots by A list DJ’s from around the globe which frequently takes out the #1 spot in the Australian iTunes Music Podcast Charts.