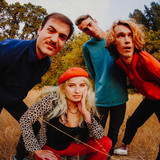 Laundry met in the University of Oregon dorms in the fall of 2017 and quickly bonded over a shared interest in the local music scene. Eugene bands like Spiller, Novacane, and The Graduating Class helped the band find gigs at house shows and bars around the college, during which the band began to develop its energetic live performance and collaborative songwriting process.

Following the release of their first EP during their freshman year of college, guitarist and singer Kiki Paroissien-Arce suggested the band record at Echohill Studios in Portland with her dad Edwin Paroissien. This proved to be a creatively fruitful decision, and their first release with Paroissien as producer, 2019’s Affirmation, found the band modest and unexpected success on streaming services. This provided new opportunities for Laundry, and garnered them enough attention to open for acts such as Mild High Club, Ritt Momney, and The Backseat Lovers. 2020’s Fast Cars saw the band experiment with more in depth storytelling and increasingly elaborate music videos, while maintaining the dreamy yet energetic Eugene rock sound of the first Echohill Studios album. Laundry lives in Eugene with a cat, a dog, and two rats.