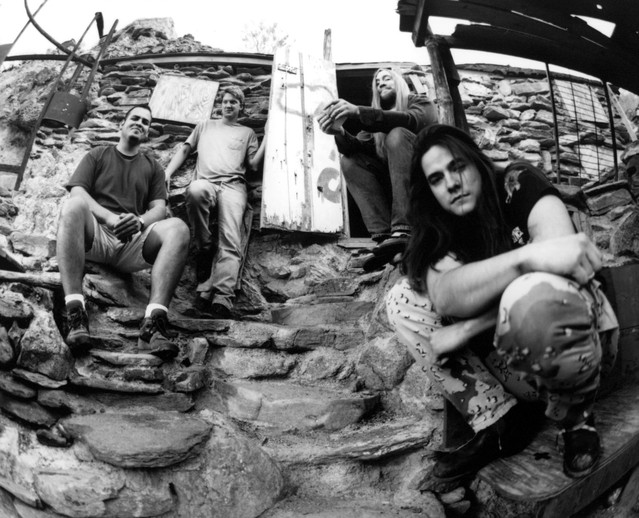 Hailing from Palm Desert, CA, Kyuss (pronounced "kai-uss") has become something like a heavy metal equivalent to the Velvet Underground. Although they are widely acknowledged as pioneers of the booming stoner rock scene of the 1990s, the band enjoyed little commercial success during their brief existence, but their combination of sludgy, down-tuned guitars (often played through a bass amp for maximum, earth-shaking intensity), spacey jams, galloping thrash metal rhythms, and organic drums became a blueprint, often copied, but never quite replicated by countless underground metal bands. Formed in 1990 by vocalist John Garcia, guitarist Josh Homme, bassist Nick Oliveri, and drummer Brant Bjork, Kyuss (named after a character from Dungeons & Dragons) began jamming at so-called "desert parties," in and around the isolated towns of the Southern California desert. The band gradually built a local following, signed with tiny independent label Dali Records, and released their first album, Wretch, in 1991. Under-produced and poorly financed, the album failed to capture the band's live sound and went mostly unnoticed until sporadic touring started earning Kyuss a reputation as a ferocious live unit, as well as the respect of many fellow musicians. One of these, Masters of Reality singer/guitarist Chris Goss, decided to produce the band's next effort, and the collaboration bore fruit in 1992's stunning Blues for the Red Sun. Soon hailed as a landmark by critics and fans alike, the album took the underground metal world by storm and established the signature Kyuss sound once and for all: the doom heaviness of Black Sabbath, the feedback fuzz of Blue Cheer, and the space rock of Hawkwind, infused with psychedelic flashes, massive grooves, and a surprising sensibility for punk rock, metal, and thrash. Based on this sudden surge of interest, the band was signed by Elektra Records just as Dali was about to go bankrupt, and despite the loss of bassist Oliveri (he was replaced by Scott Reeder, formerly of the Obsessed), the band continued building momentum with 1994's Welcome to Sky Valley. Also recorded under Goss' guidance, the album nearly matched the brilliance of its predecessor and saw Kyuss taking the novel approach of grouping the songs into three extended suites. Still, despite such creative promise and an ever-growing fan base, personal strife had already begun tearing the band apart, and drummer Brant Bjork was the first to depart when they concluded their fall tour. Then, although they quickly recruited the jazz-trained Alfredo Hernandez to replace him on 1995's noticeably less inspired ...And the Circus Leaves Town, a final rift between Homme and Garcia finally brought Kyuss' meteoric run to a disappointing halt. 2000's Muchas Gracias: The Best of Kyuss collected rare outtakes and live recordings and effectively put a capper on the Kyuss legacy, but after a period of relative silence, each bandmember's talent began leaving its mark on a number of relevant projects. Garcia briefly worked with straightforward desert rockers Slo Burn in 1997 before reuniting with Reeder in the much more promising (but ultimately doomed) Unida, later lending his in-demand pipes to Hermano and other bands. Brant Bjork sang and played guitar in his own power trio, Che (featuring his Kyuss replacement Hernandez on drums), and released a number of solo albums while joining top fuzz rockers Fu Manchu on a full-time basis. As for Josh Homme, discounting a short touring stint as rhythm guitarist for Screaming Trees, he initially retreated into production and spent much of the late '90s collaborating with an impressive array of musicians on the eclectic Desert Sessions. Some of this material was later reworked into his next major project, Queens of the Stone Age, which saw him paired with original Kyuss bassist Nick Oliveri (who had kept busy working with Dwarves) and, at first, drummer Hernandez, as well. Ironically, by their third release (and last with Oliveri), 2002's Songs for the Deaf, Queens of the Stone Age had achieved significantly larger sales than Kyuss ever did, though it's arguable whether they've yet matched their predecessor's legendary status. ~ Eduardo Rivadavia, Rovi