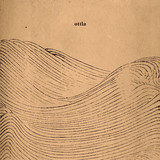 Ottla is the latest outlet for the boundless energies of Bert Dockx (Dans Dans, Flying Horseman and the odd solo-venture; see Strand and Transit)

and was founded in late 2017. It plays soulful, instrumental music, organically and playfully combining elements from different genres. After putting together a band with an unexpected line-up (besides guitar: two drummers, double bass, saxes, electronics), it soon became clear that Ottla was going to be more than just a fleeting jazz revival. Inspired by the chemistry that instantly started flowing in the rehearsal studio, Dockx created a series of new compositions tailored to these musicians. They spent a year rehearsing, experimenting and occasionally, giving live shows. Early 2019, an intensive Jazzlab tour followed after which Ottla went into the recording studio straight away. Dockx’s regular producer/ally/soulmate Koen Gisen captured Ottla at their finest and most spontaneous moments, and crafted a lush and vivid sound mix. Ottla plays a unique blend of musical styles; it flows, grooves, rocks and swings; scratches and soothes. The music is captivating, visual, original and lyrical. Frequently mischievous, at times mysterious or deeply melancholy, even brutal. Ottla’s sound is defined most of all by the distinctive character of each individual band member and by the sparks that fly between them, but it also bears the unmistakable mark of its creative driving force. Come along for the ride.