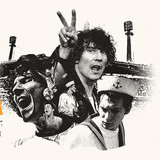 Seemingly out of nowhere, Håkan Hellström arrived with his smash hit debut single "Känn Ingen Sorg För Mig Göteborg" in the spring of 2000. Although this was his debut as a solo artist, Hellström had been a musician for years. As a member of indie pop/rock cult heroes Broder Daniel and Honey Is Cool -- featuring the Knife's Karin Dreijer -- he had already recorded several albums as a bass player and drummer. In 1999, Hellström asked some of his musician friends to be the backing band on a demo tape he was going to record. Though he hadn't written songs for his previous bands, Hellström had written quite a few in Swedish on the side. After completing the demo, he sent it to various record companies. He was besieged with offers of a record deal, and finally decided to sign with Virgin, his sole demand being that the album was recorded straightaway. On the album, and in concerts that followed, he was backed by a seven-piece band containing members of Soundtrack of Our Lives, Weeping Willows, and the Broder Daniel founding member, bass player Daniel Gilbert -- all acquaintances from the music scene in Göteborg, Sweden. His sophomore record, Det är Så Jag Säger Det, was released in 2002, this time drawing influences from Brazilian samba well as Swedish folk singers Evert Taube and Cornelis Vreeswijk. Ett Kolikbarns Bekännelser followed in 2005 before he released Nåt Gammalt, Nåt Nytt, Nåt Lånat, Nåt Blått, an album made up of tracks that didn't make it onto his previous records. Hellström took a step back from the music industry following the birth of his son in 2006, though he did manage to perform the occasional concert, as well as release albums För Sent För Edelweiss (2008), 2 Steg Från Paradise (2010), and Det Kommer Aldrig Va över för Mig (2013). Although all three hit number one, the latter was by far the most successful, going triple-platinum in Sweden. On June 7, 2014, in his home town of Göteborg, he played for a record-breaking 70,000 people at the Ullevi Stadium. He was joined on-stage by friends including jazz saxophonist Nils Berg, musical stalwart Mattias Hellberg, and Lars-Erik "Labbe" Grimelund. The recordings of this concert were made available at the end of 2014 for streaming. His next album, Du Gamla du Fria, spent three weeks at number one in Sweden, and also charted highly in Norway. ~ Anders Kaasen & James Pearce, Rovi