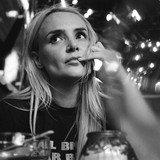 Emma Swift is an Australian-born songwriter, currently residing in the USA. A gifted singer inspired by Joni Mitchell, Marianne Faithfull and a plethora of dead poets, her sound is a blend of classic folk, Americana and indie rock.   In August 2020 she released the critically-acclaimed “Blonde On The Tracks”, a Laurel Canyon inspired reimagining of some of her favourite Bob Dylan tunes on Tiny Ghost Records. The album received Best of 2020 accolades from Rolling Stone, Nashville Scene, No Depression, The Guardian and more.   “Her high, clear voice highlights each syllable, letting you hear the words form, one seemingly following inevitably from the other, until they feel handed down, fragments of old songs now speaking to each other.” - Greil Marcus, LA REVIEW OF BOOKS   “Swift navigates Sansone's majestic folk-rock arrangements like the able captain of a frigate sailing over shimmering seas.” - Bud Scoppa, UNCUT MAGAZINE   “Nobody has ever sung Dylan quite like this Nashville-based Australian singer-songwriter, nor with such a rare interpretive gift…comparable to Emmylou Harris’s Wrecking Ball in its intent, execution and intimacy.” - Andrew Stafford, THE GUARDIAN   ★★★★ - The Guardian ★★★★- Record Collector ★★★★ - The Irish Times 8/10 - Under the Radar 8/10 - Uncut Magazine