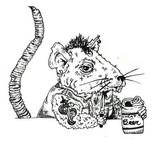 Thirsty Curses' sound covers a vast array of rock ‘n roll subgenres including punk, folk, country, prog rock, 90s alternative, and pop. As John Adamian of YES! Weekly put it, "Thirsty Curses make rock’n’roll, with a boisterous beer-swilling edge to it. Many of these songs are about living it up while things fall apart at the seams, or at least trying to find some glory in chaos and meaninglessness."