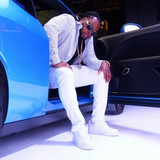 Young Cake - artist and songwriter, best noted for his ability to spit real bars, while still transcending into genres like R&B and Reggae. As a lyrical composer of Caribbean heritage, his versatility sets him apart from the crowd and makes him an outstanding emcee and musical mastermind. Young Cake began his journey early by watching his mother perform at a young age. With musical talent being inherent to his family, he was convinced that he would pursue a full-time career in entertainment.  After graduating from High School, Young Cake followed his dreams to become an emcee, there was nothing more important than living beyond an average life. Cake spent time perfecting his craft and learning how to self-manage his career in music. Once he began travelling and connecting with industry executives, the doors opened for him to build relationships with notable business tycoons.  One of Young Cake's greatest accomplishments to date is becoming a father to his baby girl. Young Cake aspires to be an international household name to impact society and take care of his immediate family and friends. He’s motivated to make a mark on the industry as the fresh new voice out of Toronto.