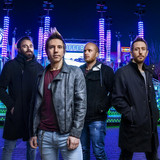 WakeUpCall is a young rock band from Rome, Italy. Their music is a mix of passion for Rock, with lots of different shades, from Alternative to Punk, from Metal to Pop. They recorded their first songs with american famous producer Beau Hill (Alice Cooper, Eric Clapton, Ratt....) and played more than 400 shows through Europe, Russia and Asia, playing also big festivals and supporting italian and international famous artists. If Beethoven Was a Punk is WakeUpCall second album, released on June 27, 2017. What if Beethoven, Mozart, Wagner, Tchaikovsky and the other great composers had grown up with Led Zeppelin, Guns n Roses and Nirvana posters on their bedroom walls? "If Beethoven Was a Punk" is a concept album about the classical music and the love for the music, that can save your life in your darkest days and moments. Every song is linked to the other through the music operas of the greatest classical music composers, but the songs in the album are not covers: every song is an original new song. In 2019 WakeUpCall have been chosen among 842 artists through Italy for SANREMO Giovani 2019. Sanremo is the biggest italian festival from 70 years. It's the most important tv show and the most important music contest in Italy. In 2020 the band released a very impressive and special version of the italian worldwide hit "Nel Blu Dipinto di Blu, Volare". The song was rewarded at Sanremo 2020 by MEI and was in the IndieMusicLike italian chart for 6 weeks (best rank: #31).