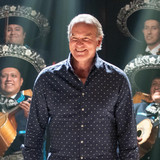 Latin singer, TV host, and actor Bertin Osborne (born Norberto Ortíz Osborne) left home at the age of 18. After living in the U.S., mainly influenced by country artists, he decided to get involved in popular music, debuting in a new talent contest in 1971. Nevertheless, his professional career began a decade later, when he got his first record deal. Along with his success as a Latin pop singer, Bertin Osborne became a TV host in his native Spain and a famous actor while playing main roles in Mexican soap operas. ~ Drago Bonacich, Rovi