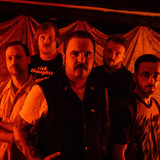 For over a decade, Norway's Death By Unga Bunga has supplied their own blend of punchy rock and roll, joyful power pop, and wavy psychedelia that reels you in and doesn’t let go. The band has made it their mission to give fans songs with irresistible hooks, a sense of humor, and guitar licks for days. The five rockers from Moss, Norway, known for exceptional crowd control, impeccable guitar skills, immaculate pizza-eating and flawless music have recently readied another assault on your eardrums: Heavy Male Insecurity. Death By Unga Bunga played garage rock when all the other anemic kids were playing so-called indie, and they transitioned to arena rock when garage and psych became all the rage. In other words, these guys know everything about being outsiders – or trendsetters as we like to call it. «BUY BUNGA OR DIE!!!!!» – RPM Online «About as close to all-killer-no-filler as it gets.» – AllMusic