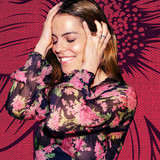 Isadora Silveira is a German-Brazilian singer and composer, born in Belo Horizonte, Brazil. She composes her songs in four languages (PORT, SPAN, ENG, FR). Her songs reveal influences of contemporary Jazz, proposing a crossover between Bossa Nova and Pop.   By the age of 8 she started studying nylon-stringed guitar in Germany, where she grew up. During her annual vacations in Brazil and through her brazilian violão teacher she started getting familiarized with Bossa Nova sounds. She started singing classics like Garota de Ipanema from Tom Jobim and Vinicius de Moraes and has warmed up German winters for family and friends ever since.   Her first single "Marguerite" from her Album "Isla" was released in February 2020. The music production was supported by Brazilian producer and musician André Èdipo, responsible for the eclectic sound that characterizes the album. Today, Isadora is based in Madrid, where she began her professional career as a musician. She cites as influences the music of Astrud Gilberto, Mayra Andrade, Céu and Adriana Calcanhotto.