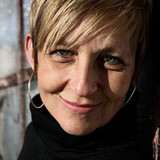 Helena Eriksson is a Swedish singer living in Stockholm. She had her first gig while visiting New York in 1992, where she guest soloed at the legendary jazz club The Village Gate. There she was introduced as “the Swedish singer with the sultry Peggy Lee sound".

Inspired and encouraged, she returned home and changed carrier from illustration into singing. And since then Helena has been working as a singer releasing her albums on her own record label Loveberry Production. In December 2020 Helena releases the soft jazzy single “An Angel On Leicester Square” written by Ulf Nilsson. In the Swedish original lyrics she meets an angel on a bridge (Västerbron) in Stockholm. In this English version the meeting takes place in London. The angel and the song now spread its wings and goes abroad!