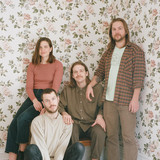 In a shifting world, Little Kid’s Kenny Boothby finds himself inspired by the idea of transfiguration - a complete change of form or appearance into a more beautiful or spiritual state. The band’s forthcoming album, Transfiguration Highway, is a thoughtful reflection on revelation and change, both spiritual and lived. Through the lens of a long standing fascination with Christian mysticism, the album title suggests a reflection of Boothby’s own process of personal growth, the way that growth has changed his perception of the world, and how that has combined with the material change of the world around him to alter the way his past relates to his present. Operating since 2011, and now joined by Megan Lunn (banjo, keys, vocals), Paul Vroom (bass & vocals), Liam Cole (drums) and Brodie Germain (drums, guitar, percussion), Little Kid has built a cult audience with a series of idiosyncratic home recordings, self-released in short cassette runs that range from more traditional albums and EPs, to 2019’s Botched Restorations - on which Boothby sold out a run of one-of-a-kind 60 minute cassettes that each contained 10 songs from his discography, chosen by the purchaser and recorded live to tape in his bedroom. For their latest, Little Kid has signed with a label for the first time, working with buzzing Brooklyn indie Solitaire Recordings to release an album that sees a rare songwriting talent deliver on the promise of his earlier work on an expanded scale.