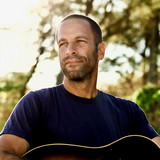 A professional surfer turned chart-topping rocker, Jack Johnson rose to fame in the 2000s with an easygoing, acoustic singer/songwriter style punctuated by an unassuming voice and a mellow, beach-bum demeanor. The combination proved to be particularly potent on the commercial front, as his first five major-label albums all climbed to platinum status, with his most lauded being 2005's In Between Dreams. While not as prolific, he continued to find success in the 2010s with well-received efforts including From Here to Now to You (2013) and All the Light Above It Too (2017). Before Jack Johnson became the 21st century kingpin of beachside pop/rock, he was a champion surfer on the professional circuit. The sport was second nature to the Hawaiian native, who began chasing waves as a toddler and, by the age of 17, had become an outstanding athlete on the Banzai Pipeline. However, Johnson was also testing other creative outlets -- specifically film and music -- and a serious surfing accident during his first professional competition convinced him to devote more time to those landlocked hobbies. While studying film at the University of California in Santa Barbara, Johnson partnered with friends Chris Malloy and Emmett Malloy to produce a surfing documentary entitled Thicker Than Water. Although the project spotlighted Johnson's talent as a director, it also showcased his flair for songwriting, and the accompanying soundtrack featured several of his own tunes. Thicker Than Water was deemed 2000's Video of the Year by Surfer magazine and paved the way for a second surf flick, The September Sessions. Meanwhile, Johnson began receiving similar notice for his songs, one of which was covered by G. Love & Special Sauce on the band's 1999 album Philadelphonic. Shortly thereafter, Johnson's demo material piqued the interest of J.P. Plunier, a French producer who had helped launch Ben Harper's career several years prior. With Plunier's help, Johnson recorded and released Brushfire Fairytales in 2001. The debut album featured a cameo by Ben Harper, thus sparking a friendship between the two musicians. Moreover, its casually spun folk songs attracted an audience that stretched far beyond Johnson's own surfing community, and Brushfire Fairytales went platinum as a result. After touring throughout the early half of 2002, he returned to the studio and issued On and On one year later. Despite its musical similarity to Brushfire Fairytales, On and On found Johnson delving into social commentary, resulting in a number of songs that paired worldly, insightful lyrics with a sunny surf vibe. Jack Johnson toured heavily in support of his growing catalog, taking frequent breaks to surf and spend time with his family. When it came time to return to the studio, he resumed his partnership with Mario Caldato, Jr., the same producer who had helmed On and On, and decamped to Mango Trees Studio in Hawaii. In Between Dreams was released in 2005, sporting a mango tree on the album's cover (in tribute to the studio) while offering a familiar mix of tropical songwriting and conscious commentary. The album peaked at number two, Johnson's highest chart position to date in America, and sold more than two million copies stateside. Oddly enough, it was Johnson's next project, the kids-oriented Sing-A-Longs and Lullabies for the Film Curious George, that finally sent him to the top of the charts. The soundtrack debuted at number one in February 2006, selling 149,000 copies during its first week and making Curious George the first animated film since Pocahontas to have a chart-topping soundtrack. Like the four albums before it, it climbed to platinum status. Despite such continued success, however, Johnson was dealt a sharp blow in 2007, when his cousin Danny Riley succumbed to brain cancer. That death, coupled with the decision to record outside of Hawaii's familiar environment, lent a moody ambience to Johnson's next record, 2008's Sleep Through the Static. Nonetheless, the bulk of the album retained a warm, sand-scrubbed feel, and Sleep Through the Static went platinum within five weeks. He traveled throughout Europe that summer, playing some of his largest shows to date, and the resulting footage was captured for the 2009 concert film/LP En Concert. Johnson released his fifth studio album, To the Sea, in June 2010. Covering a nine-year span, the Jack Johnson & Friends: The Best of Kokua Festival compilation appeared in 2012 and featured performances from his benefit concert for the nonprofit environmental education organization the Kokua Hawaii Foundation. Johnson returned to his Mango Tree studio with Caldato to record his sixth studio long-player, From Here to Now to You. The album, which was released in September 2013, was preceded by the single "I Got You." A couple of live releases quickly followed -- the vinyl-only Live at Third Man Records 6-15-2013 came out in November 2013 and an EP called From Here to Now to You appeared in 2014 -- and then he went quiet in 2015 and 2016. Johnson returned in early 2017 with the single "Fragments," the first taste of his seventh studio album, All the Light Above It Too, which appeared in September of that year. In 2020, he issued the singles "The Captain Is Drunk" and "Don't Let Me Down," the latter of which was a collaboration with German folk duo Milky Chance. ~ Andrew Leahey & James Christopher Monger, Rovi