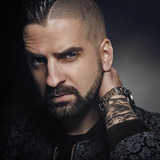 From a powerful and fervent performance on stage right down to a sophisticated and driven approach to production, René de Bruijn, better known as Digital Punk is unquestionably the totality of a born entertainer. By putting in the hard yards to cement his name in a pioneering position, Digital Punk heavily influenced a new wave in raw hardstyle. Besides his splendid performances as Digital Punk, he also represents 50% of the infamous Public Enemies live-act and is known for being the man behind the renowned Unleashed podcast. These on-going career highlights have made René definitively put his signature on the raw hardstyle scene and serve as an inspiration to budding producers and fans on all corners of the globe… Digital Punk’s on-going career highlight as the flagbearer of the Unleashed collective has embedded him deep within the raw hardstyle industry. And it’s far from done, as the concept is ever expanding. A massive highlight in 2016 was the kick-off of his exclusive live-act “Public Enemies”, together with Hard Driver. With an immense debut performance at Q-BASE, this invigorating live-act quickly embedded itself within the hardstyle scene, with already confirmed 2017 appearances at Emporium, Dreamfields, Daydream, Reverze and QAPITAL, the latter of which they produced the anthem for, “Start The Rage”. Digital Punk has timelessly proven that a high-quality and creative approach to production, an undying passion and dedication to music can go a long way.