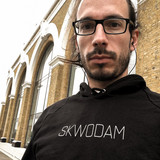 Skwodam is a European music producer and musician based in London. His music is downtempo, electronica with influences of jazz, ambient and techno. His distinctive sound is organic and balanced, emotional and thoughtful, often compared to Jon Hopkins, Bonobo or Max Cooper. 'I love the organic feel of the track, even though it also feels electronic and modern.' Hannah V He studied composition, orchestral, jazz and pop arrangement, music technology, film music and sonic arts at Goldsmiths University of London and also joined Goldsmiths Music Studio as an Assistant Engineer under Mikko Gordon (Kamasi Washington, Radiohead, Pendulum) and Sean Woodlock (The Comet Is Coming, London Contemporary Orchestra). He is a member of The Rattle, a community of artists and innovators in London and Los Angeles that have been rewriting the rules of music, art, and startups.