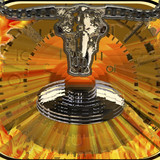 Conjuring up sweeping panoramas of dusty astral plains and the allure of whiskey-laden honky tonks, Western Terrestrials are the kind of wry, unconventional outsiders country music could get used to. In their latest release, Back in the Saddle of a Fever Dream, the Vermont-based group accomplishes a tricky feat: threading the needle between paying homage to classic country, and forging their own brand of unapologetic, hard-driving cosmic American music. Their love of country tradition is real and deep, with hints of their heroes Roger Miller, George Jones and Waylon Jennings. Yet Western Terrestrials’ take on country music is deliberately left of center, more in line with alt-country troublemakers like JP Harris and Sarah Shook & The Disarmers. The sounds of gospel, cowpunk and rock n roll meld in happily defiant cohabitation alongside true country grit. The story of how the album came together takes a page out of the Western Terrestrials own playbook: a little unexpected, a little stranger than fiction, but totally welcome. It involves Dean Miller (son of Roger Miller) reaching out to produce five songs, Georgette Jones (daughter of George Jones and Tammy Wynette) joining to sing a duet, Ketch Secor (Old Crow Medicine Show) requesting they write a song about an alien, and a surreal trip along an apocalyptic highway. Back in the Saddle of a Fever Dream was released on July 4, 2020.