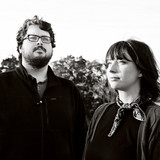 Texas-based duo the Oh Hellos are a lyrical, dramatic folk group centered around the talents of siblings guitarist/vocalist Tyler and vocalist Maggie Heath. Raised in a musical family, the Heaths were encouraged to play music together from a young age. Prior to forming the Oh Hellos, Tyler worked as a solo artist, releasing several albums including 2009's We're All in This Together and 2010's Let It Go. Around 2011, the siblings formed the Oh Hellos and began performing together around their hometown of San Marcos, Texas. That same year, they released their self-titled EP. The group's full-length debut album, Through the Deep, Dark Valley, appeared in 2012 followed a year later by holiday EP, The Oh Hellos' Family Christmas Album. Although primarily a duo, the Heaths eventually added a large ensemble of backing musicians for tours and live shows. In 2015, the Oh Hellos returned with the album Dear Wormwood, inspired by the writings of authors C.S. Lewis and Patrick Rothfuss. The first in a series of installment releases, the duo issued Notos in late 2017. The thematic album is named for the ancient Greco-Roman god of the south wind and inspired by the Heaths' experiences in both the Pacific Northwest and Gulf Coast areas. ~ Matt Collar, Rovi