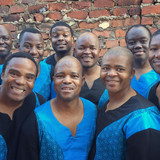 South Africa’s Ladysmith Black Mambazo was founded in the 1960s by Joseph Shabalala. Joseph used his hometown’s name, Ladysmith, to honor his family history. He added the word Black in reference to the black oxen, the strongest of all farm animals. Mambazo is the Zulu word for chopping axe, a symbol of the group’s vocal ability to clear the path to success. They have 19 GRAMMY Award nominations and 4 GRAMMY Award wins. Nelson Mandela called Ladysmith Black Mambazo South Africa’s Cultural Ambassadors to the world. It is a moniker the group members hold close to their hearts. Apartheid, the South African social system forced upon the country’s black majority to keep the white minority government in power. Ladysmith Black Mambazo followed a path of peaceful protest. Joseph, following the ways of Martin Luther King Jr and Mahatma Gandhi, wrote songs of hope and peace. When Nelson Mandela was released from prison, in 1990, he stated that Ladysmith Black Mambazo’s music was a powerful message of peace that he listened to while in jail. In the mid-1980s, singer/songwriter Paul Simon visited South Africa and added the group's harmonies into the famous Graceland album, a recording that introduced world music to mainstream audiences. Ladysmith Black Mambazo carries a message of Peace, Love and Harmony as they travel the world. They bring this message, in song and dance, to every theater they perform in. We hope you will join them as they sing their message.<br>