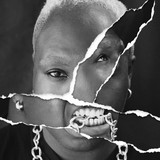 Toronto’s R. Flex makes electro-R&B with a voice that’s at once smooth, gritty, and powerful. Their arresting live performances has helped them build a name for themselves in Toronto's music scenes and in Canada. They have appeared at Toronto Pride, POP Montreal, Sled Island (Calgary), MEGAPHONO (Ottawa), Slut Island (Montreal), and Grickle Grass (London), opening for the likes of Silla and Rise, Above Top Secret, and Le1f. Their debut EP “In & Out” received over 28K streams and their song “Thursday” was a Top 20 finalist at Imsta Festa Toronto. They have been featured on Paper Magazine, YOHOMO, CBC Here & Now, and named one of Now Magazine's Artists to Watch in 2020. In February, they released "Tulips" with record label Halocline Trance.