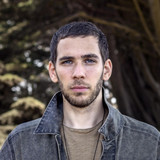 Basement Alchemy, based in Santa Cruz, California, is the musical brainchild of songwriter, producer and multi-instrumentalist Shai Pelled. In 2012, while working on his debut album, Shai started releasing one-man-band covers on YouTube. After gaining 2 million views and a following of 14k subscribers, he felt it was the right time to focus entirely on making original music. He released IN SPIRALS, a self produced 8 track rock album that include fan favorites 'Your Light' and 'Detectives In The Mud'. In 2017, Shai moved from New York to California and found new inspiration. He wrote and recorded 25 songs consecutively over one year. The songs selected for his next album were chosen with the help of Team Alchemy, Basement Alchemy's fan club on Patreon. The second album CHANGING COLORS was released on August 21, 2019.