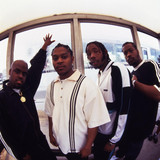 The annals of hip-hop history are replete with their fair share of legends. Many of these legendary groups have added tremendously to the development of the culture of hip-hop. But none of them have been as innovative, as incisive, as impactful, or as inspirational as the Atlanta-based, four-man lyrical band of brothers known the world over as Goodie Mob. Consisting of Big Gipp, Cee-Lo, Khujo, and T-Mo, Goodie Mob first formed in 1991 as a vital part of the hip-hop collective known as The Dungeon Family, which consisted of Outkast, Witchdoctor, Backbone, Big Rube, Cool Breeze, and P.A., led by the multi-platinum selling production team, Organized Noize. Under the musical auspices of Organized Noize, the Goodie Mob became one of the few Southern-based rap groups to gain nationwide notoriety in the 90s. Most importantly, Goodie Mob is one of the few Southern rap groups aside from Outkast and the Geto Boys to earn respect from Hip-hop’s fickle fans and critics who count their 1995 debut, Soul Food, as among the genre’s best albums ever.