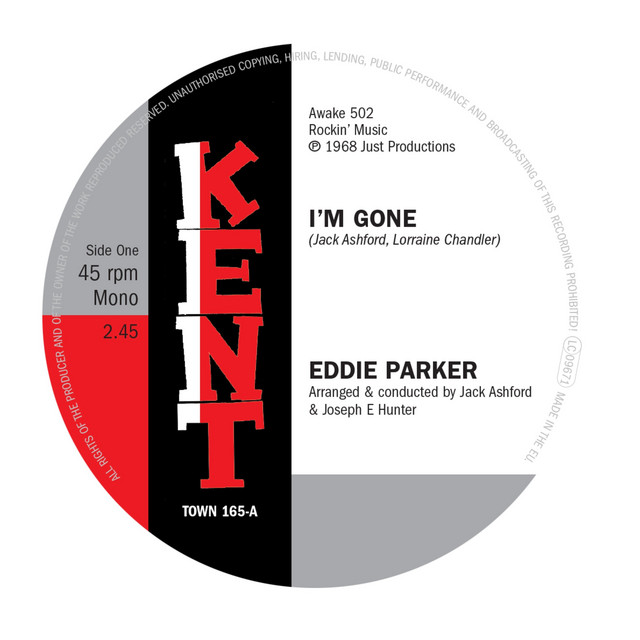 Best known among Northern soul aficionados for the perennial favorite "Love You Baby," singer Eddie Parker was born and raised in Saginaw, MI, regularly traveling to nearby Detroit during the mid-'60s in pursuit of a career in music. There he connected with the songwriting/production team of Jack Ashford (a former percussionist with Motown's legendary session band the Funk Brothers) and Lorraine Chandler, signing with their fledgling Pied Piper Productions to record "I'm Gone," issued on the tiny Awake label in 1966. The record went nowhere, and Parker's recording career stalled until 1968, when Ashford and Chandler founded their own Ashford label. The venture would yield just one single before going bankrupt, but what a single: ideally matched to Parker's gritty, passionate vocals, "Love You Baby" was a flop upon its initial release but enjoyed new life in the 1970s thanks to its massive popularity among the DJs and clubgoers populating Britain's Northern soul revival scene, regularly topping lists of the most popular Northern classics of all time. When Ashford and Chandler partnered with Ernest Kelly to form a new label, Triple B, they again called on Parker to christen the venture -- his third single, "I Need a True Love," was Triple B's first release in 1970, soon after appearing in France thanks to a licensing deal with the Parisian label Googa Mooga. The follow-up, "Can't You See (What You're Doing to Me)," was issued on the Jay Walking label in 1971, meeting the same grim fate as its predecessors. Parker would not make another record for four years, although he remained a staple of the Detroit nightclub circuit. He finally resurfaced on vinyl with 1975's "Body Chains," produced by Ashford and Chandler for the Prodigal label. When Ashford relocated from Detroit to Los Angeles the following year, he brought a cache of unreleased master tapes with him, and without Parker's knowledge or consent his previously unissued "But if You Must Go" came out on the Beverly Hills label Miko in 1977. Meanwhile, the enduring popularity of "Love You Baby" prompted the British reissue label Grapevine to officially re-release Parker's masterpiece in 1979, inspiring Chandler to found her own JR label to cut a new Parker single, 1980's "She." JR also issued an LP, The Old, the New, the Blues, featuring Parker/Chandler duets on two cuts. The sessions would prove Parker's last, as he largely renounced his secular career to focus on the church. However, he occasionally consented to appearing with Chandler at British Northern soul weekenders, once again performing his classic hits to a new generation of fans. ~ Jason Ankeny, Rovi