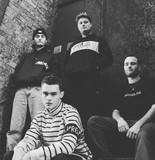 Liverpool four-piece Azura Kings' scintillating guitars and rhythm's have sent them on a different path to most in 2020. Meeting under the cliché of parties and gigs through a mutual love of UK hip-hop and acts such as Sticky Fingers and Foals, Azura Kings' have set about fusing elements and attitudes from both into their fundamentally modern sound. Their live show is where they stand out most, appearing on tour with the likes of Airway's and No Hot Ashes, and playing at Liverpool's Sound City Festival 2019, AK are en route to releasing loads more music and organising their own DIY shows over the next few months. WTS.