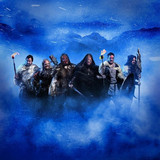 Sweden’s six-headed viking hird Grimner incorporate folk instruments into their own melodic, yet aggressive brand of metal. With lyrics explicitly sung in Swedish that revolve around norse mythology, folklore and viking tales, together with a fresh and new sound brought to the genre, Grimner have taken enthusiasts of both metal and folk music by storm. Their second and praised full-length album “Frost Mot Eld” (2016, Despotz Records) have received outstanding world-wide reviews. In 2018 Grimner celebrates their 10th anniversary, and have released a brand new album “Vanadrottning”! No matter if you are a fan of folk metal or not, Grimner and their dynamic music brings something new to your music collection!