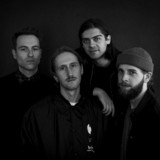 Let that guitar tone cascade all over your Friday malaise, and take a swan dive into maybe the best new shoegaze track in several years.” - Vanyaland (on „Spinning in Reverse“ ) Hailing from Regensburg, Germany and founded in late 2017, Swirlpool delivers an exceptional mix of highly energetic Shoegaze and floating, melodic ambience. By dealing with the aesthetics of contrasting sounds the four-piece creates unique dreamscapes with a pinch of deep, warm melancholy. Swirlpool consists of Christian Atzinger (Bass), Thomas A. Fischer (Guitar & Vocals), Jonas Heckelsmüller (Drums) and Markus Kraus (Guitar & Vocals). The first EP entitled “Camomile” contains four tracks and was released on Reptile Music in May of 2018. „Camomile“ received critical acclaim - „Shaping an ethereal hazy introspective atmosphere immersed in reverberation, drawn under a restrained swirl of distortion, pounding drums and warm bass lay the foundation (...), to transport the listener in an hypnotic dream-like state of deep melancholy and ecstatic bliss.“ -Whitelight / Whiteheat After numerous shows in Germany and Europe the band recorded another two tracks in mid-2019. The first being “Spinning in Reverse” which was released in July of 2020 has already been titled a modern classic with an expansive wave of sound that swells and revs with ease. The follow-up „Cinnamon Sun“ is yet to be released. Swirlpool is currently working on their first full length record scheduled for release in 2021.