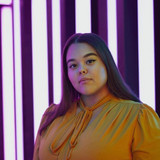 LEILA AARDEN is a rising singer/songwriter with her eyes firmly set on the prize of becoming one of the hottest talents of today.   She has been singing seriously she was 10 and began her music career officially at the age of 15 by signing a production deal with MMI Music. Within 6 months she was offered a management contract by DJL in London and secured her first record deal with ToCo International on the day of her 16th birthday!   Her first single was Moving To My Own Beat, closely followed by a featured appearance on the Nightfreaks (NL) single Smile released a few weeks later.   She is 100% dedicated to her musical career and is currently being brought up by her father in the South of Spain.