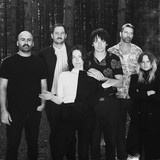 July Talk stormed the airwaves with the flinty radio-ready rock of their debut and the volatile siren songs of Touch, with its saw-toothed pop + convulsing tension. For album three, the band cracks their equilibrium open to find a thrilling new balance in asymmetry. Resolute in their vision and unafraid to escape the cage, July Talk’s path has never been through fitting in. Their music, viscerally, blisteringly hot, sliced right through the alternative and rock charts for multiple number one singles. Their churning and fiercely physical performances make spaces hiss and hum, spit and seethe in glorious, artful abandon. Black + white and vividly complex, Pray For It is about breaking patterns of action and reaction. “Hard to break these ancient habits,” Fay sings in the hazy, balletic whirl of “Pay For It,” the first offering from the new record. Conflict, a major theme throughout, drives the story behind this song, a steel-toed shoegaze swoon. “Pay For It” bears witness to the machinations of aggression as it tenderly licks those wounds. With Pray For It, July Talk continues to rise with purpose and poise. From the start, the band has fostered a community of creators and collaborators on stage, on film and among those also challenging systemic inequities. July Talk has also grown as advocates of an urgent and fundamental music industry recalibration, through curatorial partnerships with festivals and by defining their own parameters for safer spaces at rock shows.