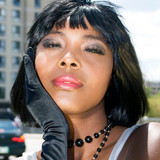 Immigrating to Canada, at the tender age of four, suffering through the impact of childhood sexual abuse and living in the child welfare system provided, Ingrid D.Johnson, with a lot of inspiration for writing poems about her journey. These poems would later become her first published, local, best selling, book of poetry in 2005 that would eventually inspire original songs that she would record and perform live with the help of her band of over 10 years, The Funky Fresh Crew. Ingrid D.Johnson is a Jamaican/Canadian, published poet, singer-songwriter, spoken word recording artist and short experimental, narrative, filmmaker. She is passionate about creating uplifting music and using her story to inspire positive social change.  Active as a multi-disciplinary artist since, July 2005, Johnson is a unique artist with musical depth, a versatile background, and an approach that’s as rich as it is meaningful. Chosen by The Manitoba Women' s Advisory Council and Mentoring Artist's for Women's Art (MAWA) in October 2011 to be honored in a government publication: Women in The Arts. Artists Working for Social Change. Ingrid D. Johnson's company, In The Closet Productions, mission and vision to be "a voice for the voiceless" ( by using original music and art to help raise awareness and funding for important social issues, like the impact of childhood sexual abuse) was confirmed.