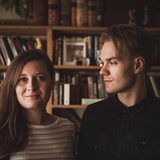 Both born and raised in the northern port city of Oulu, Finland, Tanja Torvikoski and Petri Kuusela circled their shared hometown for years before meeting each other. However, from the moment they first met in 2013 it didn’t take long for a driving duo to take shape. Kuusela’s virtuous guitar playing and Torvikoski’s haunting singing voice make up a musical conversation that is the foundation of their songwriting as well as live dynamics. Lanai is a modern folk americana project emerging from Northern Finland, where American singer-songwriter and folk music tradition meets wide, Scandinavian soundscapes. Debute releases

Follow the Sun and Hold onto Nothing found their way onto several major international playlists that resonated with the graceful and compassionate songwriting of Lanai. Later on the second track of the record Joanna begun to stand out as a singer-songwriter tour de force in its own right as it was hand picked by editorials, radios and fans internationally answering to the call of perhaps those exhausted in the good fight. Ship's Bell was released March 1st 2019 gaining beautiful reviews internationally. The album was recorded in a remote cabin in the outskirts of Lapland. When the album was nearly done, they were joined by two Grammy-winning musicians Rob Moose (strings) and Kim Rosen (mastering) in the finishing of the record.