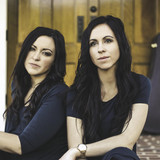 Sister-duo, Alicia & Whitney, are internationally-selling worship leaders, songwriters, authors, and speakers who have a passion to connect others to Jesus Christ through equipping them to cultivate a lifestyle of worship. Growing up in musical family, they learned to sing and harmonize at a young age, but their true passion for worship and ministry was birthed in their early twenties after their father passed away of cancer. Their relationship with Jesus, worship, and songwriting were the life sources that sustained them during their darkest times and were the catalysts of their healing from the inside-out. Through this, they learned what it means to commune with God through a lifestyle of worship and have found true fulfillment in His Presence. Since then, Alicia & Whitney have traveled throughout the United States and beyond, equipping and inspiring others to cultivate a deeper relationship with God through worship, speaking, the books they've authored, and humanitarian efforts in Honduras and Tanzania. They have two albums entitled, "Core" and "A Portrait of Worship" which include all original music written by Alicia & Whitney. They have released a brand new single, "All For Nothing"

in January with more new music coming soon! Alicia & Whitney are also the hosts of their podcast "Coming Up Higher with Alicia & Whitney" which can be streamed through all major podcast platforms.