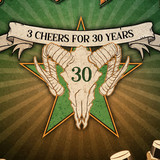 Since the band formed in 1990, Fiddler's Green has stood for a unique style of music that is not only art in its own right but would also put them on the musical map across Germany and beyond. A creative blend of folk, ska, punk, reggae and elements of rock that the six band members dubbed IRISH SPEEDFOLK – a new music style with a newly coined name that is as catchy as it is original. With almost 2,000 gigs under their belt in Germany and across Europe, Fiddler's Green have built up a reputation for their live performances. And true to their reputation, the founding fathers of Speedfolk have proven time and again, in every live show they’ve done, that they are seasoned musicians working perfectly in sync – but what they are not is stuck in old and familiar routines. Their musical style is gritty and authentic – something to sink your teeth into – and it is this that sets the band apart. Now, 30 years after they came together as a band, Fiddler’s Green have put together something extraordinary for themselves and their fans – a one-of-a-kind compilation featuring some of the most popular Irish folk songs of all time. The ultimate Irish folk collection! And all done in the unique Fiddler’s style of course – a no-frills authentic style that is as light-hearted as it is crazy. They’re wild, befogged and befuddled, and always up for a bit of craic.