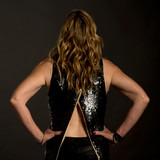 Awarded prizes from Billboard Magazine, Musician Magazine, the Independent Music Awards, and many more, Cat Dail is an internationally touring singer-songwriter, multi-instrumentalist, and producer. She has released five albums on the Lucky Magnet recording label she founded. Dail has been a highlight of the national indie rock scene since she first hit in the 90s. Leading her NYC band, Distant Cousins, she played all the legendary clubs in NYC, including a Friday night residency at the Bitter End, and most colleges and clubs from Vermont to Virginia, Colorado to California. Most recently, Dail has been joined by some of the best musicians in the world, featured regularly at SXSW and other festivals, and played for causes she believes in. Her music is heard on TV (CBS Sports, PBS) and in films (independent and feature). In addition to a life in music, Dail has led important and long-lasting community efforts in leadership roles at libraries, food banks, and as original Board Chair of the internationally-acclaimed, female-led Strike Anywhere Theater Ensemble, a progressive, multi-media collaboration and winner of grants from Poetry Foundation, among others. Cat counts herself lucky to be raising two kids and to meet people, everywhere, who join Love in defeating Fear.

Look out for Crush Redux --