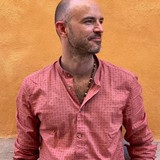 Julien Oomen is an Amsterdam-based musician who draws inspiration from spiritual ceremonies and trainings. While being a witness to the transformational process of many men and women, Julien moves closer to his own center of stillness. From that stillness, words and music come like waves. ​ In July 2018, Julien released "Oase Sessions I ", followed by "Oase Sessions II " in April 2019. A new full length album, "Both Sides Of The River", was released in December 2020. For this record Julien saved up the songs in the past two years that were specifically triggered by trainings, workshops and ceremonies within the realm of men’s work. The songs touch on beautiful movements that are already happening: men coming alive in their fatherhood, in brotherhood through men’s circles; in self-realisation and in knowing that there’s an alchemy in each human being that goes beyond binary notions of “the masculine” or “the feminine”. ​ For live shows Julien often teams up with his partner Lenneke van Staalen, a master​ of (northern) Indian classical music on violin, who comps him in his songs as well as playing mesmerising improvisations. Other collaborations include Pernilla Kannapinn and Diego Nicolás Rodriguez. www.julienoomen.com