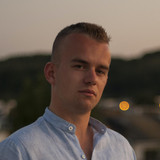 Bartosz Gruchała is a Polish film composer, producer, and pianist. Bartosz has been pursuing a career in Film Scoring for the past seven years. While working as a full-time composer in “BrAlo” - an award winning theatre group from his hometown, he received many awards for his compositions and performances. In 2018, he started collaborating with the Academy of Fine Arts in Gdańsk, Poland, where he scored for multiple animations and graduate projects for enrolled students. In addition to creating scores for several pictures, he took Film Scoring Workshops with Oscar winner Jan A.P. Kaczmarek in Poland in 2017 and completed the National Film & Television School’s Film Scoring Short-Course in England in 2018. Bartosz is currently studying at the Berklee College of Music in Boston, USA.