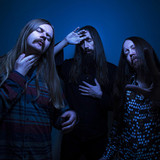 After the prog metal outfit Vokonis released their third album, “Grasping Time”, work immediately went into crafting more material. They set the goal to further expand the prog landscape, no limit was set on each individual track. Instead of focusing on pure riff worship, with songs based around guitar, Vokonis wanted to write as a complete unit with more diverse vocals, rawer guitars and heavy bass. Each piece of the puzzle found its place in the soundscape. The end result is a huge expanse known as “Odyssey”. It might be quite the undertaking to name an album such a thing, but this is what the band felt channel through them as they worked through the material. A musical journey that is nowhere near the end for the band. As the lockdown made it impossible to play shows, Vokonis doubled down on writing and recording. Drawing further inspiration from heavy progressive bands such as Opeth and Baroness but also letting the rock side get loose, songs such as “Hollow Waters” and the titular track “Odyssey” shows exactly where the band is headed. With the studio addition of Per Wiberg (keyboards) the songs took on new life with an added dimension. No longer tied to plug-ins or pedals, the mellotron could finally make its true debut onto a Vokonis record. As 2020 draws to a close, Vokonis next chapter is just about to begin. With a new album exploring newfound land they embark on their Odyssey.